It's the second consecutive day of splendid weather.  Needless to say, between the fact that I have been actually working for a client, doing my usual work of driving Mr. Harry and being out in the sunshine I have had nothing to say here.

On days like this, unless preoccupied with getting caught up on mowing the grass, I like to walk about three miles.  Lately I've been starting out with a stroll around our "back 40."   That's the ten acres of wetland  that lies about 1000 feet behind us.  When we bought this place 20 years ago, it was an impenetrable swamp used only by hunters.  First time I went back to explore I got turned around and lost until I remembered that moss grows on the north side of the tree.

Several  years ago Hickory discovered that we could have the wetland "reclaimed" by the government, which would pay us to allow it  to be done.  And I thought, "Gee I could keep this  impenetrable swamp or let them pay us real money to turn it into a series of ponds surrounded by an embankment on which we could maintain a path so we could walk back there and see ducks  and stuff...".  What a hard decision that was!

So now we walk back there to see ducks... these little brown wood ducks, and mallards, and this time of year especially, and as much as we would prefer not... Canadian geese.  There are two mating pair of geese, one of which hatched seven gosling.  (We think we may have lost a goose last night to one of the fox or maybe the giant coyote.  There was a lot of squawking and honking and we had to let the dogs out to investigate.)  We have a blue heron who feasts every year on the quadmillion frogs that live around the ponds and make a lovely country style racket.

We have pheasant this year (the mega millionaire neighbor raises them for shooting on his property and occasionally one escapes).  No turkey this year, an alleged giant coyote (which could be the neighbor's dog), raccoon and possum and fisher and generally, wild things. And of course deer, which breed like rats here.  we also have rats, by the way, muskrats for sure.  And to keep it all clean and tidy, buzzards.  It's a pleasant way to start a walk and they say a few minutes with mother nature every day is good for you.  Hoping for no deer ticks. 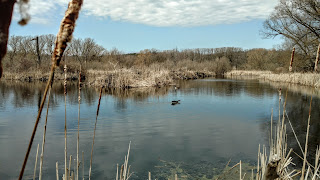 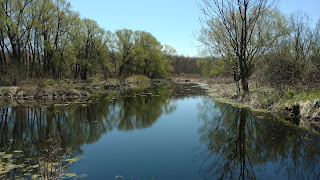