I remember when I was in college a week  in April that seemed to exist to punish.  I owned a thin ancient trench coat (all the rage when I got it in 1962) and it was no match for the biting winds that launched themselves off the edge of Mt. Oread and came screaming down the valley as I trudged back to the dorm to work.  It was bright and sunny and bitterly cold.  I hated that.  This week's weather has reminded me of that week.  Sunny and lovely and 40 degrees with a stinging, biting cold.  I'm boycotting the outdoors until we get come actual sunny weather.

4/19/20
On Sundays I spend the morning with the NYT.  I usually get through the front section and save the rest for the week.  Two articles:
an indepth look at what the next year or two  may look like:
and how an actual leader guides her country through a crisis.

The weather is again sunny and cold.  I should note this is good for my solar production, which improves with lower temperatures (generated 462 KWH in the last week).   Still I'm not going out, and neither is Fred.  We acquired Fred last year after my brother died and Fred ended up in need of a home.  Originally known as Fred Weasley, he has become Fred Friendly here.  The sun looks warm and inviting.  Fred taps on the patio door, asking to go out.  I open the door.  Wilbur, the other dog, goes out.  He prefers cold  weather.  Loves sleeping in snow drifts.  Not Fred.  He steps onto the deck, turns around, comes back in.  Gives me a look.  Too damn cold.   Ten minutes pass.  Fred taps on the door.  I open the door.   He sticks his  head out, it  is still cold.  He comes back in.    I warn him not to interrupt again.  Ten minutes pass.  He wants to look again.  Fred is an optimist.

So yesterday I decided to make oatmeal cookies.  I use the Quaker Oats recipe with an extra half cup of raisins.  Got the butter and sugar started and reached for the brown sugar. OOPS!  We have less than a quarter cup. And I'm not going shopping until Tuesday.  Here is a cooking challenge right out of the Chopped pantry!  What to do? 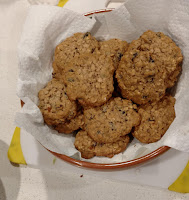 I have plenty of white sugar and powdered sugar and white Karo that I use for pecan pie.  There is molasses, which is a possibility, but I  don't want a flavor that strong.  I remembered that one of Harry's nurses had given me a pint of her hand-made NO.  2 maple syrup as well as a pint of what is essentially black strap maple syrup, which is like molasses, but has a better flavor profile.  Like maple and chocolate.  How much to use? Less than half cup, I figured it would be sweeter than the brown sugar?   I poured it in until it  looked right.  The result?  They took a little longer to bake, delicious.  I may do  that again.